What it takes to record a Black person’s death 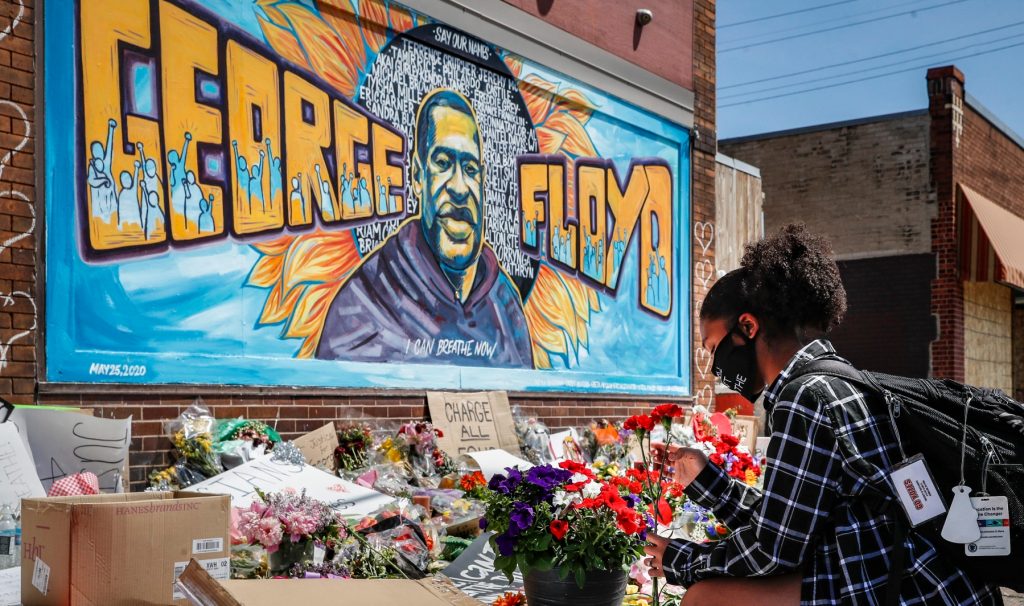 Malaysia Hammond, 19, places flowers at a memorial mural for George Floyd at the corner of Chicago Avenue and 38th Street on May 31, 2020, in Minneapolis. (John Minchillo/AP Photo)

Constantine Gidaris is a PhD candidate in English and Cultural Studies at McMaster. This article is republished from The Conversation under a Creative Commons license. Read the original article.

On July 17, 2014, Eric Garner’s murder by NYPD officers was captured by Ramsey Orta on his mobile phone camera. Choked, handcuffed and pinned face down to the ground, Garner’s repeated calls for help, encapsulated by the phrase “I can’t breathe,” were ignored by the arresting officers.

Nearly six years later, the murder of George Floyd by Minneapolis Police Department officers was recorded by Darnella Frazier, a young Black woman who captured the final moments of Floyd’s life on her mobile phone. Her video shows Floyd handcuffed with his head pinned underneath the knee of a police officer, repeatedly yelling, “I can’t breathe.”

Like Orta’s video, the footage that Frazier uploaded to Facebook has since gone viral. Used by many media outlets, Frazier’s video has led to public outrage and ongoing mass protests. It also assisted in the decision to fire the four arresting police officers, and to subsequently charge one with second-degree murder and the other three with aiding and abetting.

Often forgotten in these far too common acts of police violence and fatal police-civilian encounters, involving unarmed Black people, is the dangerous, emotional and traumatic labour of bearing witness.

Following Garner’s death, Orta’s life took a drastic turn for the worse. From 2014 to 2016, Orta was arrested three times for a series of charges, which activists maintain stem from retaliatory set-ups by the NYPD for filming the video. Despite providing the footage that served as the catalyst for the “I can’t breathe” slogan and movement, Orta remains incarcerated to this day.

The day after Floyd’s death, Frazier returned to the scene of the murder, crying and emotionally distraught. In a video that has been viewed nearly 2.5 million times, Frazier pleads, “They killed this man. And I was right there! I was like five feet away! It is so traumatizing.”

If the emotional and traumatic consequences of bearing witness to Floyd’s murder were not enough, Frazier has also encountered online harassment for recording and posting the video. In the comments section of the video Frazier uploaded to Facebook, some have chastised her for recording the footage without intervening. Frazier comes to her own defence, writing:

“I don’t expect anyone who wasn’t placed in my position to understand why and how I feel the way that I do. MIND YOU I am a minor! 17 years old, of course I’m not about to fight off a cop.”

Attempts to diminish the profound effects of bearing witness to traumatic events aim to dismiss the notion of shared trauma. As literary critic Shoshana Felman and psychoanalyst Dori Laub argue, the listener or, in this case, the viewer, becomes “a participant and co-owner of the traumatic event.” In this sense, viewing the deaths of Garner and Floyd behind a screen can be different but equally traumatic experiences for both the person recording and for the viewer.

The effects of bearing witness

Viewing race-based trauma can be particularly traumatic for Black people for whom police violence is a leading cause of death. This realization is intensified by the danger that the mere occupation of public space poses for Black lives.

In part, this stems from a refusal on behalf of white folks to recognize the extensive history of race-based policing in both the United States and in Canada. There is also a pressing need for white people to understand that policing itself is a form of harm, especially for people of colour. As writer and activist Desmond Cole reminds us, police violence committed against Black people is too often treated as a “one off.”

Some suggest that using mobile phone cameras to watch the police is a means of “prevent[ing] police violence from being used against other community members or oneself.” But given that Black men are far more likely to be killed by police than white men, bearing witness on camera as a form of cop-watching has not prevented further police violence from occurring. Instead, bearing witness involves race-based trauma that attempts to hold police accountable for the pain they have long inflicted against Black people and communities.

As writer Kia Gregory says, acts of police violence and deadly police-civilian encounters “are so pervasive, they inflict a unique harm on viewers, particularly African Americans, who see themselves and those they love in these fatal encounters.”

The trauma of bearing witness extends from the person experiencing, recording or witnessing violent or fatal police encounters, to those who subsequently view and witness the recording through a digital medium, and most often through social media platforms. Viewing such videos can induce stress, fear, frustration, anger and anxiety. There is medical evidence to suggest that viewing footage of race-based trauma can lead to a physical ailments, including eating and sleeping disorders, high blood pressure and heart problems.

Bearing witness to these acts of deadly police violence can be traumatizing for anyone. Keenly aware of the mental health toll that police violence and race-based trauma can take, a GoFundMe campaign has raised nearly US$500,000 for Darnella Frazier’s “peace and healing.”

For Black folks, in particular, the terrifying and everyday reality that they encounter at the hands of police is a trauma that endures long after the initial act of witnessing has occurred. It is a trauma that is relived and re-experienced not only in person but behind the screen.

Constantine Gidaris is a PhD Candidate in English and Cultural Studies at McMaster. This article is republished from The Conversation under a Creative Commons license. Read the original article.