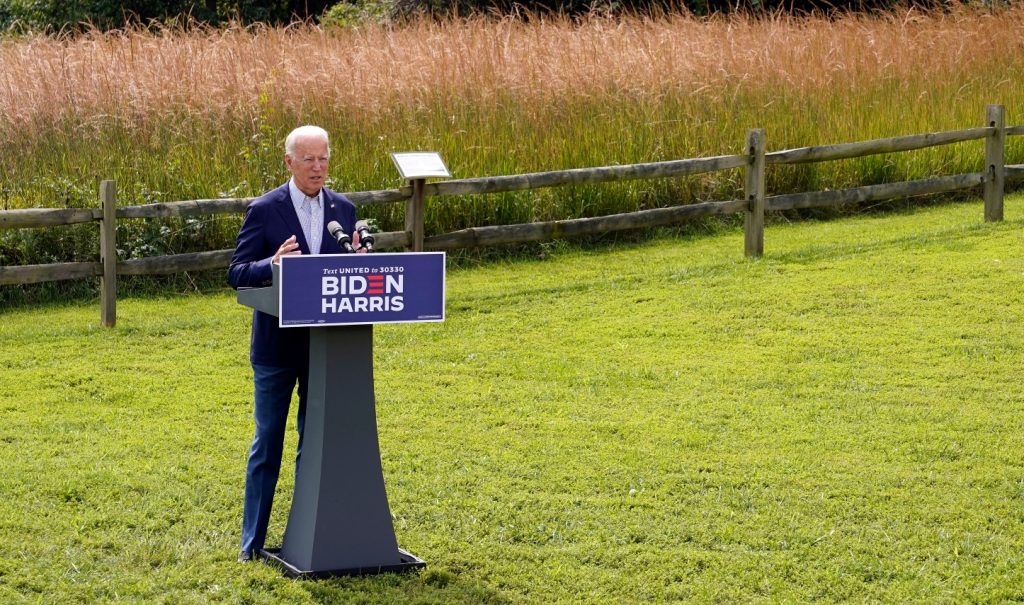 Robert O’Brien is a professor of political science.

The crucial words came during the second United States presidential debate on Oct. 22. In a discussion about climate change and energy, Democratic candidate Joe Biden declared that he would lead a transition to renewable energy:

“I would transition from the oil industry, yes.”

He also promised to eliminate federal subsidies to the oil industry and move to net-zero emissions by 2050. President Donald Trump, sensing a major blunder by his opponent, called on voters in Pennsylvania, Texas, Oklahoma and Ohio to vote against Biden’s energy plans.

The moment was noteworthy because it highlighted the new political importance of climate change and energy policy in U.S. politics. The Democratic candidate, now the president-elect, enthusiastically committed to taking action on climate change and energy transition. What’s equally significant is that Biden’s strong climate change position doesn’t appear to have hurt him in the key swing state of Pennsylvania or in the general election more broadly.

Although Biden’s climate plan is not as ambitious as the Green New Deal advocated by the left of the Democratic Party, his plans are serious.

He has called for a “Clean Energy Revolution” that includes mandatory emission cuts from electric utilities and support for electric vehicles. An interesting aspect of his overall plan is a commitment to spend at least 40 per cent of funds in historically disadvantaged areas.

Biden’s energy revolution will be limited by several factors, however.

His efforts will be constrained by the Democrats’ failure so far to win the Senate — two runoff elections in Georgia in early January will determine what party controls the chamber — combined with continued opposition from the fossil fuel industry and communities dependent upon fossil fuels.

Nevertheless, Biden can be expected to move ahead in response to climate science and pressure by some of his key constituencies, such as young people and progressives. This has significant implications for Canada and Canadians.

Any Canadians hoping for U.S. government support for the ongoing expansion of Canada’s fossil fuel infrastructure are likely going to be disappointed.

An example of this is the Keystone XL pipeline. Designed to bring Canadian oilsands bitumen to American refineries, its approvals were halted by former president Barack Obama in 2015 and renewed by Trump.

Although the Alberta and Canadian governments continue to champion the project, Biden has said he will cancel regulatory authorization, declaring that the U.S. has no need for oilsands crude.

Politically, this is a relatively painless action for Biden to burnish his climate change credentials. Canadian government and industry arguments about the need for more pipelines face an uphill battle.

A second implication is that Canadian industry can expect to see more competition from U.S. firms climbing on the climate change bandwagon. American companies will ramp up clean energy technologies and products. The question is whether Canadian-based industry will be up to the challenge and receive adequate government support.

There is some indication that even some of the most anti-environmental politicians are slowly starting to recognize the urgency to take climate action. Ontario’s Premier Doug Ford has vigorously campaigned against any form of a carbon tax and rolled back measures supporting renewable energy.

Yet he also recently committed $295 million to the Ford car company for its plans to build electric vehicles in Ontario.

This realization of the significant economic opportunities offered by green technologies opens up the door to a more evidence-based discussion of how public policy can support both a green economy and economic growth.

A third implication is that Canada needs to have a serious discussion about how we can manage an energy transition to renewable fuels just as Biden is pledging to do south of the border.

The transition is coming. The question is whether Canada will turn it into an opportunity to clean our air and environment, or make the transition more difficult by delaying action and spending vast sums to maintain fossil fuel production and employment.

The energy transition is a challenge facing all countries, but it will be particularly difficult for Canada because so much of our economy and large regions of our country are heavily dependent on the exploitation of fossil fuels.

Assistance for affected communities and industries is vital, but at the moment, many politicians are more comfortable denying the necessity and inevitability of the changes that are coming.

A final implication is that programs designed to help Canadians transition to clean energy should take a leaf out of the Biden plan and target assistance to communities that have been historically disadvantaged by industrialization and fossil fuel development.

Indigenous communities that have been marginalized and harmed by other people’s exploitation of natural resources, as well as racialized and poor communities exposed to dangerous environmental risks, need to be integrated into clean energy spending.

The president-elect is committed to moving on the issue of climate change. Important parts of his electoral coalition are also adamant that he oversee a transition to renewable energy. Equally important, his policies reflect the overwhelming scientific evidence that aggressive action to reduce greenhouse gas emissions is required to avoid serious economic and social consequences.

Robert O’Brien is a professor of political science at McMaster University. This article is republished from The Conversation under a Creative Commons license. Read the original article.