What’s killing galaxies? Large survey reveals how star formation is shut down in extreme regions of the Universe 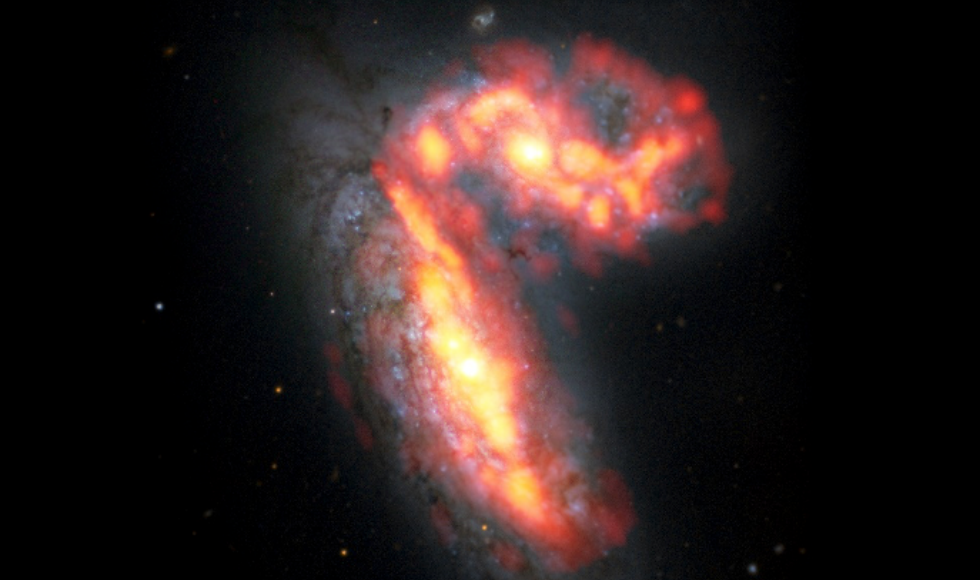 NGC 4567 and NGC 4568 are 2 of the 2,000 galaxies in the Virgo Cluster, located roughly 65 million light-years from Earth. Observed by the VERTICO—Virgo Environment Traced in Carbon Monoxide—Survey, the 2 galaxies are among those in the galaxy cluster impacted by extreme physical processes that can lead to the death of galaxies. The galaxies are shown here in composite radio data from ALMA with molecular gas in red/orange and optical data from the Hubble Space Telescope with stars in white/blue. Credit: ALMA (ESO/NAOJ/NRAO)/S. Dagnello (NRAO)

Galaxies are being killed in one of the most extreme regions of the nearby Universe and astronomers want to know why. A recently published paper, which will be featured in the December edition of the Astrophysical Journal Supplement Series, provides the clearest evidence yet, that the environments surrounding galaxies can reach far within the galaxies and have a lethal impact on the fuel needed to birth new stars: their molecular gas.

The Canadian-led paper from a collaboration of 36 international astronomers, which includes Christine Wilson, Distinguished University Professor at McMaster and a principal investigator, presents state-of-the-art observations of molecular gas in 51 galaxies belonging to the Virgo Cluster.

The paper is the first to be released from the Virgo Environment Traced in Carbon Monoxide Survey (VERTICO), undertaken using the Atacama Large Millimeter/submillimeter Array (ALMA) in Chile.

“We know that galaxies are being robbed of their gas. If enough gas is destroyed or removed, star formation is shut down, effectively killing the galaxy and turning it into a dead object,” said Toby Brown, Plaskett Fellow at the National Research Council of Canada, lead author and former postdoctoral fellow at McMaster.

“What VERTICO reveals better than ever before is which physical processes affect the molecular gas and how they dictate the life and death of the galaxy,” he says.

A galaxy’s ability to form stars is influenced by where the galaxy lives in the Universe and how it interacts with its surroundings. Of the many different environments in the Universe, galaxy clusters are among the most massive, hottest, and most extreme, making them the perfect cosmic laboratory for observations such as VERTICO. The nearby Virgo Cluster is seven million lightyears across and contains thousands of galaxies hurtling through superheated plasma at speeds of up to several million kilometers per hour. It is an environment so extreme and inhospitable that entire galaxies can be stopped from forming stars in a process known as galaxy quenching. Not to worry though, our Milky Way galaxy is nowhere near the Virgo cluster or any cluster and thus not in danger.

“With VERTICO, we looked at 51 galaxy gas reservoirs in the Virgo Cluster; which are the direct fuel supply for new stars, and provided many of the most detailed images of gas disks in cluster galaxies ever observed. These new images are incredibly useful for revealing how star formation in galaxies – arguably the Universe’s most important physical process – is shut down by external influence,” explains Brown.

VERTICO is the first ever Canadian-led ALMA Large Program, a specific subset of ALMA observations designed to address strategic scientific issues that will lead to a major advance or breakthrough. While Virgo has been studied at almost every wavelength of cosmic light, this is the first large survey of molecular gas with high sensitivity and resolution in a galaxy cluster.

“The first study of molecular gas in the Virgo cluster was published over 30 years ago, and astronomers have been debating about the influence of the cluster environment on this star-forming gas ever since,” said Wilson. “I’m confident that the VERTICO data will allow us to answer this long-standing question, as well as to understand exactly how these various environmental effects cause cluster galaxies to shut down their star formation production line.”

VERTICO observations were taken between July 2019 and April 2021. Beyond this first paper, this unprecedented detail of galaxies in the highly active Virgo Cluster will provide astronomers with the data needed to study and better understand how star formation and galaxy evolution proceed in the most extreme environments in the Universe, in an effort to better understand our own.