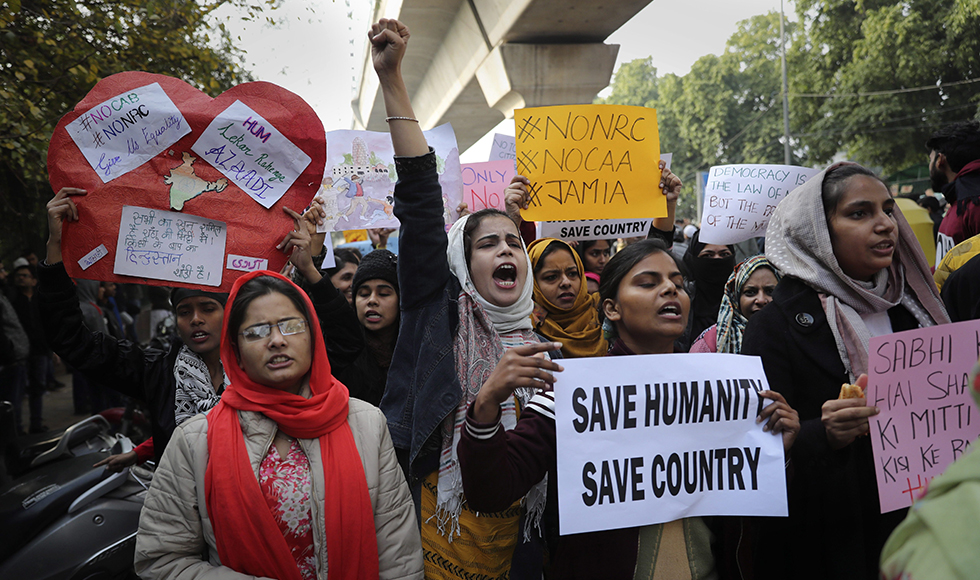 News and social media reports have circulated videos from India of masked attackers beating up students in the dorms of New Delhi’s prestigious public university, Jawaharlal Nehru University (JNU). One JNU teacher told the Times of India “For one and half hour the police did not do anything …” News reports say the violence lasted close to three hours.

This attack by thugs follows years of unrelenting attacks by the Modi government and its allies on JNU, and a month of police violence at Jamia and Aligarh Muslim universities.

For Prime Minister Narendra Modi, dissent is the enemy of democracy.

Modi’s antidemocratic attitudes have been cultivated through his training. He rose through the ranks of the male-only Rashtriya Swayamsevak Sangh (RSS), the parent organization of Modi’s Bharatiya Janata Party (BJP). The RSS was founded in 1925 and is a prominent proponent of “Hindutva — Hindu-ness and the idea that India should be a ‘Hindu nation.’”

The CAA grants fast-tracked citizenship to members of religious minorities, Hindus, Sikhs, Buddhists, Jains, Parsis and Christians, who have fled from Pakistan, Bangladesh and Afghanistan.

Such unprecedented state violence against student protesters provoked a pan-Indian solidarity of students and galvanized widescale resistance to the CAA.

Modi joined the RSS in his teens and then worked as a RSS pracharak (leader) for 15 years. A pracharak is a full-time worker dedicated to disseminating RSS ideology. As a pracharak, Modi dedicated his life educating Indian youth in RSS culture, which expects obedience and reverence of authority.

The RSS recruits schoolboys and college youth for its local branches (sakhas). They train youth to dedicate themselves towards establishing a Hindu nation through physical activities and spiritual lessons.

For their book Khaki Shorts and Saffron Flags, scholars Tapan Basu, Tanika Sarkar and Sumit Sarkar interviewed RSS members to understand the hierarchical, deferential structure of the RSS local branches (sakhas). They explain how young boys receive lessons in scriptures and mythology to inculcate values of “absolute loyalty” to the leader and to the organization.

This results in an uncritical obedience to the leader.

Modi has hailed M.S. Golwalkar (1906-73), a spiritual founder of the RSS, as his “ideological mentor.” In Golwalkar’s 1966 book, Bunch of Thoughts the chapter “Internal Threats” has three subheadings: “The Muslims,” “The Christians” and “The Communists.” Muslims and Christians were considered to be threats because of their religion, that is, for not being Hindus. Dissenters were branded as “Communists” for questioning the Hindu Right’s attempts to Hinduize the nation.

To justify the use of state violence against students, the Modi government has routinely represented them as discontent and violent. Section 144 of the Indian Criminal Procedure Code prohibits the assembly of four or more people in an area. This colonial-era regulation has been used to criminalize student dissent and to delegitimize student protesters as “anti-nationals.”


The violence unleashed on university campuses and against civilians protesting the CAA over the past month is an attempt by the Modi government to discipline both Hindus and non-Hindus. The intent is to create fear to thwart, control and surveil protests.

On Dec. 29, 2019 a street play called Jamiawala Bagh was performed outside Jamia university campus. The play highlighted the parallels between British colonial violence and current Hindu Right violence in India.

It drew on the story of British colonial violence against a public gathering in 1919, in Amritsar, Punjab. At a public park, the Jallianwala Bagh, a British general ordered his troops to gun down unarmed civilians. The Jallianwala Bagh massacre was a critical turning point in India’s independence movement. After the massacre, Mohandas K. Gandhi (popularly known as Mahatma Gandhi) rejected British justice, and launched the Non-Cooperation Movement in 1920.

Gandhi called for an abandonment of government educational institutions, government service and foreign goods, and for resistance to colonial laws. In his arrest and trial for the leadership of the movement, Gandhi explained that he believed dissent would ensure the colonial state responded to the demands of the Indian people for independence from foreign rule.

At great personal risk, the students today are also resisting Hindu Right violence and demanding a democratic public culture. They are publicly registering their dissent hoping to prompt the government to listen to its citizens.

Universities can equip students with the knowledge to talk back to power rather than become docile subjects of the state. The anti-CAA protests that have spread across India are at least in part initiated by university students.

This suggests that Indian universities have done well in educating youth of their civic obligations and social responsibilities and have enabled them to exercise leadership.

This is contrary to notions of obedient citizenship ingrained in the RSS pracharak. At the helm of the world’s largest democracy, Modi is not interested in cultivating thinking youth or engaging in dialogue with them. He considers thinking and questioning youth a threat to his government. The threat is to be controlled through the use of brute force.

The Modi government seems to have successfully tutored the police and its supporters to loathe university student protesters. This is turning India’s public universities into spaces to display Hindu Right vigilantism.