During the Second World War, BBC listeners kept calm and listened to an unlikely star 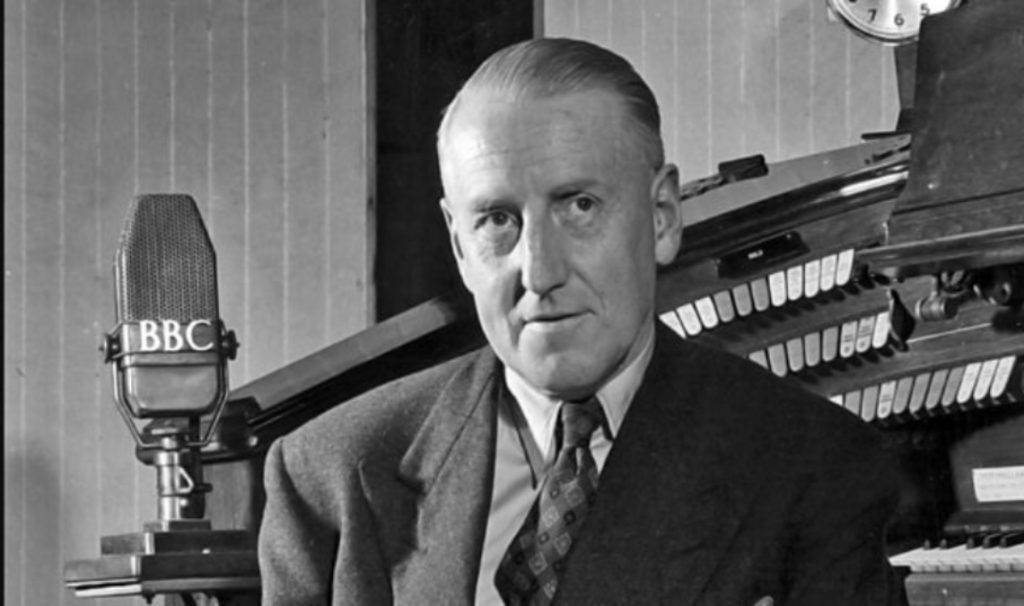 Christina Baade is a professor in Communication Studies at McMaster University. This article is republished from The Conversation under a Creative Commons license. Read the original article.

In Britain, during the first weeks of the Second World War, public entertainment venues closed down. The blackout darkened the streets, and people stuck at home turned to radio as never before. They were seeking news but also diversion — a difficult balance for the BBC to achieve. Many hated what they heard. But the BBC had a seemingly unlikely star: Canadian-born Sandy Macpherson, the BBC’s resident theatre organist.

In September 1939, a listener wrote, “We should like to know if you keep Sandy Macpherson chained up in the dungeons of the BBC.” Indeed, at the end of the first month, Macpherson reported that he had been “on duty more or less continuously,” having broadcast at least 50 times.

But why? After Britain declared war on Germany on Sept. 1, 1939, the BBC, like the rest of the country, was in emergency mode. It sent its music and entertainment departments outside of London and had to get government clearance for any non-staff entertainers. It shut down its nascent television service and reduced radio to a single wavelength. It stopped broadcasting sporting events.

What listeners got was news, announcements, lots of gramophone records and live music played by a limited pool of staff musicians, including Macpherson.

Had German air raids begun immediately, everyone would have understood that it was unrealistic to expect lavish entertainment in an emergency. But instead, listeners at home were anxious and bored and unimpressed by the BBC. Both MPs and critics condemned its lacklustre programming. For some critics, like W.R. Anderson of the Musical Times, Macpherson was part of the problem.

But not everyone agreed. This was not the sort of “fine music” that highbrows like Anderson wanted, but it was extremely popular. Listeners sent thousands of appreciative letters to Macpherson and defended him in the Radio Times, the BBC’s program guide. When one listener complained that he always played the same tunes, another urged him to “continue to fire away with Handel’s ‘Largo,’ ‘the Holy City,’ and ‘The Lost Chord.’”

Today, we usually associate theatre organs with silent films, but in the United Kingdom they remained popular well into the 1940s — in cinemas, at dance halls and especially on the radio. Starting in the 1920s, the BBC featured theatre organists from cinemas around the country. By the mid-1930s, the broadcasts became an almost daily feature. In 1936, the BBC purchased a £8,000 Compton organ and hired its first resident theatre organist, Reginald Foort — chosen from a pool of 350 applicants. The London Times reported that theatre organs were the most popular form of entertainment on the BBC.

Theatre organs were spectacular technological marvels, loaded with special effects. The people who played them became stars. Many theatre organists were virtuosi and arranged their own music. When they played on the BBC, theatre organists went from local celebrities with their names on cinema marquees to national stars. Fans collected their autographs and they sold millions of records.

A theatre organist became popular, not just through musicianship, but through their personality. The goal was to sound friendly and conversational. When the BBC hired Macpherson in November 1938, head of BBC Variety John Watt wrote:

A reassuring, relatable friend: liked a pint of beer

Macpherson came into his own during the early months of the war, a period — called the “Bore War” — of intense anxiety when nothing seemed to happen.

Sandy, as listeners called him, spoke like a reassuring, relatable friend. “Sandy Macpherson’s quiet voice is very reassuring at a time when our ears are on the alert for warning sirens,” one family wrote in September 1939. At Christmas, fans showered him with “flowers, mufflers, handkerchiefs, cigarettes, fruit and pots of jam.”

Building on his role, Macpherson started hosting “Sandy Calling” in February 1940. It was a series designed to connect military forces with their families at home. Listeners could write in with a song request and a message for a loved one — and they did so by the thousands. Macpherson even invited senders into the studio to speak for themselves. Eventually, there would be a “Sandy Calling” for Canada, the Middle East and India.

Macpherson was at home when a bomb hit the BBC’s St. George’s Hall, destroying the organ and much of his music in September 1940, during the height of the London Blitz. The BBC moved his broadcasting operations to Wales in semi-secrecy, waiting several months to announce the loss.

Throughout the war, the press highlighted Macpherson’s kindness and ordinariness, helped by Canadian stereotypes. He was a “lanky, genial Canadian,” who had “once worked in a lumber camp” and liked “a pint of beer,” wrote the Empire News. The Sunday Pictorial called him “radio’s most human personality” and “probably the BBC’s best contribution to the war so far.”

During pandemic, listeners searching for comfort

With social distancing and concern about COVID-19, we are turning to the media for news, but also entertainment and comfort. Musicians, arts organisations, public libraries and media corporations are responding with creativity and generosity.

We have so many more choices than Macpherson’s Second World War listeners, but the question of what homebound listeners need and want remains.

The Metropolitan Opera is now streaming for free, as are orchestras, chamber groups and soloists around the world. Classical music lovers and newbies have an exciting opportunity to explore the genre in new ways.

But many people may find themselves turning to familiar pop and lighter entertainment that brings comfort and escape, just as Sandy Macpherson’s listeners did during the Second World War.

Christina Baade is a professor in Communication Studies at McMaster University