Home ice: Star researcher back at Mac to pioneer use of AI to fight antibiotic resistance 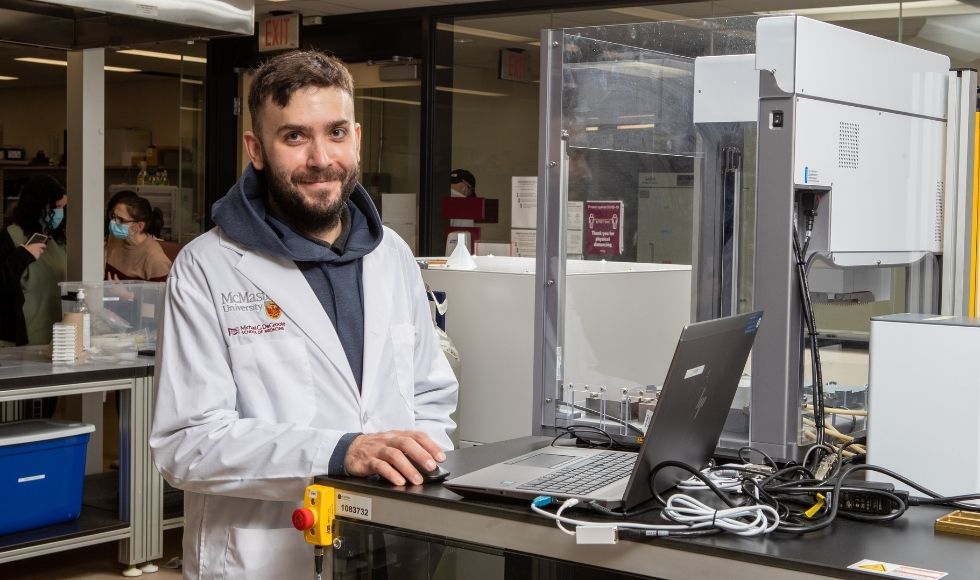 The researchers at the helm of Canada’s Global Nexus for Pandemics and Biological Threats are no strangers to the hockey metaphor — whether it’s “more shots on goal” (increasing likelihood of success) through automation or “skate to where the puck is going to be” (working on the Next Big Thing in infectious disease research and antibiotic discovery).

It begs the question: If infectious disease research is like hockey, who is McMaster’s Wayne Gretzky?

While the 31-year-old Hamilton native refutes any comparison to The Great One, it’s hard to ignore his potential.

Just as Gretzky changed the game of hockey, Stokes is using creative methods and tools like artificial intelligence to fundamentally transform antibiotic discovery research as we know it.

Stokes’ original foray into academia was unassuming. At 15 years old, he took a seasonal job mowing the lawn for John Kelton, former dean and vice-president of McMaster’s Faculty of Health Sciences.

The relationship might have ended there, but there was something about Stokes’ work ethic that piqued the interest of the world-renowned hematologist. In 2007, the year Stokes graduated high school, Kelton invited him to spend the summer in his lab.

“My introduction to academic scientific research was through the lens of a high school student who knew nothing,” says Stokes, now an assistant professor of Biochemistry and Biomedical Sciences at McMaster. “But it planted the seed.”

Spurred by newfound inspiration, Stokes went on to receive his BHSc (Honours) in 2011 from McMaster, where he met Eric Brown, a Distinguished University Professor and member of the Michael G. DeGroote Institute for Infectious Disease Research (IIDR).

There was instant synergy between the two, and what started as an undergraduate thesis project in Brown’s lab soon evolved into a PhD in antimicrobial chemical biology.

“At the time, I didn’t know anything about bacteria or antibiotics,” says Stokes. “But I loved going to the lab. The people were incredible, the work was super cool, and I thoroughly enjoyed the topic I was studying at the time. I discovered it was a field I just loved.”

In fact, it was his work in Brown’s lab that solidified his career choice in science.

“It just shows you how much resolve he had very early on,” says Brown. “He came to me as a very green undergrad and just caught fire as a young scientist. He knew he had hit his stride.”

While working under the mentorship of Brown, Stokes made two important discoveries around the problem of drug resistance.

First, he looked at how a certain part of bacteria (the ribosome) is created and found a way to stop it with an anticonvulsant drug called lamotrigine.

“It was a field-changing effort in terms of discoveries made early on in his PhD,” says Brown.

Then, as he was working on a paper about his first discovery, Stokes made a serendipitous observation: an antibiotic that historically hadn’t worked against one type of bacteria does in fact work, but only at low temperatures.

This observation jumpstarted the second half of his PhD studies, investigating the cell surface of bacteria and how to get antibiotics more efficiently into those cells.

It also opened the door for the next logical leap in his career path: a postdoctoral fellowship at the Broad Institute at MIT and Harvard, including a prestigious Banting Fellowship from 2018 to 2020.

The problem, and the problem-solver

Each year, 700,000 people die worldwide from antibiotic resistance, a number that is predicted to grow to 10 million by 2050. The aggressive evolution of antibiotic-resistant bacteria and a dwindling antibiotic discovery pipeline have resulted in an antimicrobial resistance (AMR) crisis. This doesn’t sit well with Stokes.

“We had this problem licked, but bacteria don’t care,” he says.

“The relentless march of evolution continues, and now we find ourselves in a position where we might return to a pre-antibiotic era. In the 21st century, antibiotic resistance shouldn’t be a problem.”

“It’s not just people who cut their hand that could die from an infection,” he adds. “It’s all of the rest of modern medicine that’s been permitted because of antibiotics: cancer chemotherapy would be too risky, pre-term birth, super risky, joint replacements, forget it.”

Drug discovery and development, while critical for our future global health and well-being, is historically expensive and time-consuming. Scientists test millions of molecules, but only a fraction ever make it to preclinical or clinical testing. As a result, few new antibiotics have been developed over the last 30 years. It’s a problem that big pharmaceutical companies have little incentive to solve because they make little or no profit from it.

And that’s where artificial intelligence comes in.

In simple terms, artificial intelligence (AI) is the ability of a machine to learn, predict, and create. It can detect gunshots and diagnose medical conditions, and it can predict the next item you want to buy on Amazon. In recent years, machine learning (ML), a subset of AI, has emerged as a tool that could substantially reduce the time frame from initial drug identification to clinical trials, thanks to the growing availability of massive data sets and advanced algorithms.

“It’s exploding as a technology, but it hasn’t been widely applied to antibiotic discovery,” says Gerry Wright, inaugural lead of Canada’s Global Nexus for Pandemics and Biological Threats and scientific director of IIDR.

In Boston, Stokes worked under the supervision of James Collins, Termeer Professor of Bioengineering in MIT’s Department of Biological Engineering and Institute for Medical Engineering and Science. Collins is a known risk-taker and creative thinker. Stokes learned everything he could about applying automation to discover novel classes of antibiotics and more rapidly understand how they work. He wrote and published several papers in high-impact journals along the way.

In 2020, Stokes, Collins and their team were selected by the Audacious Project, which is housed at TED, and aims to assist budding talent to shape their best ideas into viable multi-year plans and present those ideas in a compelling way to potential supporters. Of this support, Phare Bio was born, a unique business model that, with the support of commercial and philanthropic partnerships, uses AI and ML to increase the rate at which promising antibiotic candidates are developed, approved and administered to patients in need.

“Jon is an outstanding creative young investigator who has connected himself with a network of really exceptional people at MIT who are applying this strategy of machine learning and artificial intelligence to antibiotics,” says Wright.

“He’s a pioneer in this area.”

This fall, Stokes returned to McMaster as a faculty member and career researcher. You could say he was a missing player on the already exceptional teams leading IIDR, Canada’s Global Nexus for Pandemics and Biological Threats and the David Braley Centre for Antibiotic Discovery.

“We could not have brought Jon back from MIT without David Braley’s investment enabling us to compete at an international level and to repatriate guys like Jon,” Wright says.

For Stokes, coming back to McMaster was a no-brainer. While his scientific achievements opened several new doors for him, Hamilton was home. “There was such a strong emotional pull back for me,” he said. “McMaster made me the scientist that I am.”

His first line of business: starting the Stokes lab, which will leverage experimental and computational approaches to discover the next generation of life-saving antibiotics with novel structures and functions that expand the capabilities of these medicines beyond the current state of art.

“The expectation from this community is that he’s going to build a spectacularly successful, independent research program and continue to keep McMaster at the forefront of research into new antibiotics,” Brown says.

It’s an ambitious expectation, but the odds are in Stokes’ favour.

Q: What drives you?

The prospect of a sick person going home healthy.

Q: Can you share something about yourself that you’re working on improving?

Q: Tell me about a life-defining moment.

Meeting my wife. She put me on the straight and narrow. She’s been a constant over several chaotic years.

Q: Where do you see yourself in the next 10 years?

Positively contributing to the ecosystem in which I find myself. I want to work hard. There’s no time to slack. And I want people to know I’m a guy they can go to. Without the incredible mentors I have had, I’m nothing. So, I want to pay it forward.

Q: What has the pandemic taught you over the last two years?

It taught me to prioritize my mental health first—that investing in my personal self ultimately results in me being more productive at work.