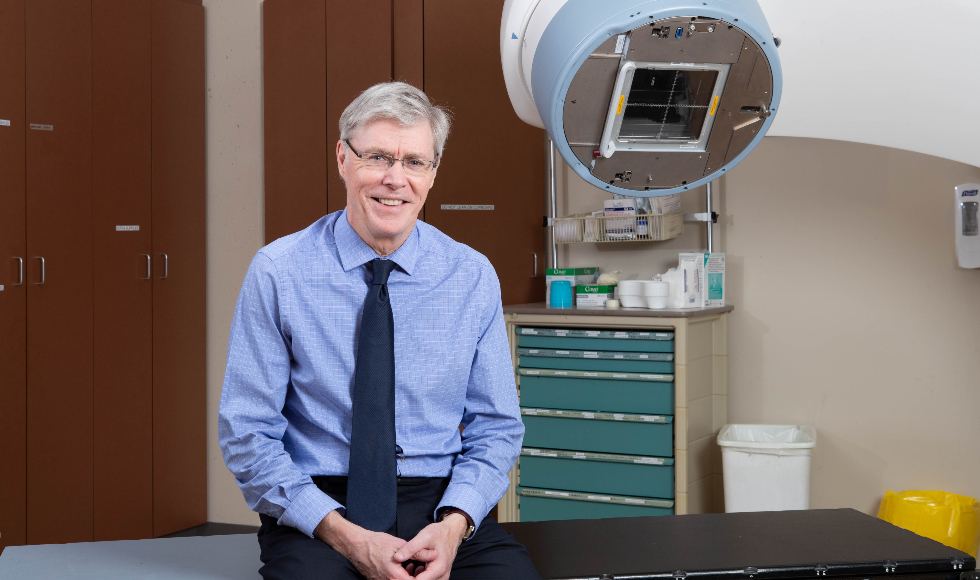 Timothy Whelan is a professor of oncology at McMaster University and a radiation oncologist at the Juravinski Cancer Centre of Hamilton Health Sciences. He holds a Canada Research Chair in Breast Cancer Research. Photo by Georgia Kirkos

A shorter course of higher-dose radiation treatment to part of the breast is showing promise in women with early-stage breast cancer who undergo breast conserving surgery, says a study led by Hamilton researchers.

Accelerated partial breast irradiation (APBI) sees larger doses of radiation delivered to parts of the breast affected by cancer. This treatment takes place in one week or less, further reducing length of treatment from the standard treatment of three to five weeks.

The multi-centre trial shows similar recurrence rates of breast cancer in patients treated by external beam APBI over the course one week compared to whole breast radiation delivered over three to five weeks.

The study data was published today in The Lancet.

“We wanted to do a study to see if we could shorten treatment as three to five weeks is not ideal for patients,” said first author Timothy Whelan, professor of oncology at McMaster University and a radiation oncologist of Hamilton Health Sciences. He holds a Canada Research Chair in Breast Cancer Research.

The randomized controlled trial, called RAPID, occurred between 2006 and 2011 in 33 cancer centres across Canada, Australia and New Zealand.

The 2,135 patients were women aged 40 or older with ductal carcinoma or node-negative breast cancer which had been treated by breast conserving surgery.

Approximately half of the patients were randomly assigned whole breast radiation, delivered once per day over three to five weeks. The other half received external beam APBI, considered to be the least invasive approach to partial breast irradiation, which was given twice a day over five to eight days.

“The results after more than eight years are exciting because they showed, with long followup, that the risk of cancer coming back in the breast was reduced with APBI to the same degree as whole breast radiation,” Whelan said.

However, his research team was surprised to find that although less early toxicity within three months of treatment was observed with APBI, the twice-daily regimen was likely associated with higher late toxic effects and worse cosmetic outcomes. This included increased small blood vessels visible on the skin, and thickening of breast tissue related to radiation.

“About 13 per cent of patients who had whole breast radiation had moderate toxicity, compared to 32 per cent for those who had APBI,” said Whelan. “As well, about 16 per cent more women treated with accelerated partial breast treatment didn’t feel their breast looked as good.

“Based on this, it is difficult to recommend the twice per day regimen at this time.”

Whelan and his team are now conducting a clinical trial to examine whether once per day APBI with more time between treatments will have better outcomes.

“We’re looking at external beam accelerated partial breast irradiation with five treatments, but only once per day rather than twice,” he said. “The early results are very promising because we’re not seeing that toxicity and our goal is to examine that further.”

The study was funded by the Canadian Institutes of Health Research and the Canadian Breast Cancer Research Alliance. The trial was conducted by the Ontario Clinical Oncology Group of McMaster and Hamilton Health Sciences.

To read the entire paper, go to The Lancet’s website.