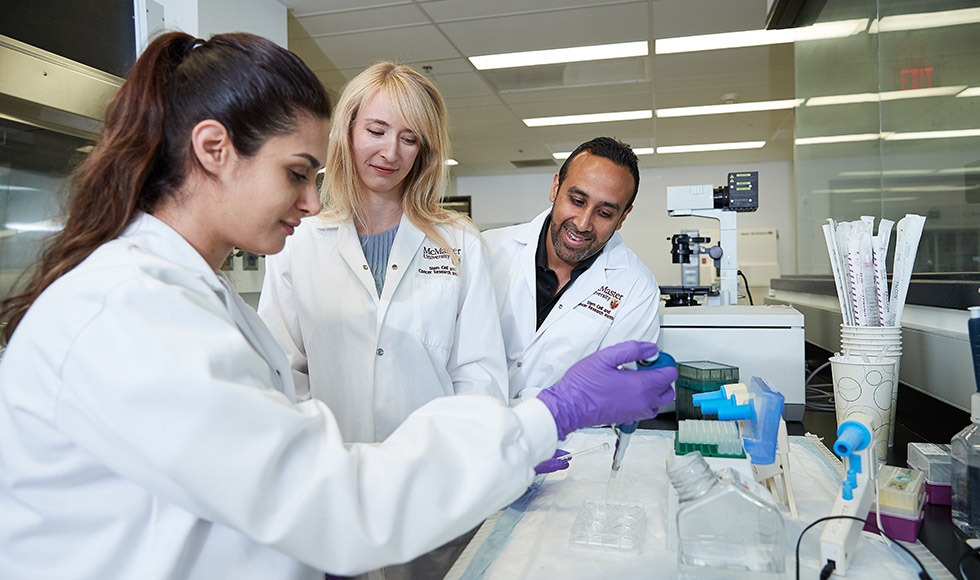 Postdoctoral fellows Lili Aslostovar, left, and Allison Boyd, centre, at work in the lab with Mick Bhatia, right, director of the Stem Cell and Cancer Research Institute at McMaster University.

McMaster University researchers have provided evidence of new cancerous cells they have termed cancer regenerating cells, which are responsible for the return of acute myeloid leukemia after remission.

Current therapy is effective at inducing remission in adult patients with acute myeloid leukemia, but most patients later succumb after a relapse. That relapse has been thought to be caused by rare and dormant cancer stem cells that escape chemotherapy.

The study published in the journal Cancer Cell suggests that leukemia cells change in unique ways in response to the chemotherapy, allowing them to masquerade for a short time so they are able to start disease regeneration.

The research involved combined efforts from both scientists and physicians and spanned more than five years in development. The team took on the challenge of hunting down the rare leukemic cells that remain right after chemotherapy treatment. The surprise was that the most resilient cells left behind after the treatment did not fit the profile of cancer stem cells.

“Many cancer researchers, including our team, have thought it was dormant cancer stem cells that can resist chemotherapy treatment which go on to cause relapse,” said Mick Bhatia, lead author and director of the McMaster Stem Cell and Cancer Research Institute.

Bhatia noted that, until now, the initial aftermath immediately after chemotherapy treatment has been largely unexplored, because leftover leukemia cells easily blend into the body and go undetected amid the chaos caused by the therapy itself.

“Chemotherapy is not entirely specific and destroys a lot of other tissues, making the patient’s body a difficult place to do the detective work to find cells responsible for relapse,” he said.

To overcome these hurdles, the team turned to a model where patient leukemic disease is established in laboratory mice, and chemotherapy can be administered to match the way patients are treated in the clinic.

“This design allowed us to zero in on the few human leukemic cells that survived, because we could easily distinguish them from non-diseased mouse cells,” said Lili Aslostovar, co-author of the study and a postdoctoral fellow of the McMaster Stem Cell and Cancer Research Institute. “We were finally able to detail what takes place during this transient period before the storm of relapse occurs.”

The team’s key finding was to identify the point at which the disease retaliates by becoming highly regenerative, setting the stage for eventual relapse. This offered a new roadmap to identify the camouflaged cancer cells that hide out in the bone marrow of leukemia patients shortly after chemotherapy treatment. Importantly, similar patterns of leukemic regeneration could be seen across a spectrum of different patient subtypes, providing a common thread to guide the development of new therapies at the critical time point after chemotherapy.

“This is a major clinical opportunity because this type of leukemia is very diverse and responds differently across patients,” said Allison Boyd, co-author of the study and a postdoctoral fellow at the institute.

“It has been a challenge in a clinical setting to find a commonality for therapeutic targeting across the wide array of patients, and these regenerative cells provide that similarity,” she said.

The researchers hope that this new understanding of leukemic regeneration will provide physicians the opportunity to introduce additional drugs in combination with chemotherapy treatment. This will take advantage of chemotherapy’s benefits while counteracting its shortcomings at the same time by targeting these altered cancer cells, said Bhatia.

“We were impressed that after chemotherapy, the disease seems to get very weak because the cancerous stem cells have been largely eliminated,” said Boyd. “We think there are opportunities here because now we have a window where we can kick the cancer while it’s down.”

Bhatia said the study results support further pursuing this new emerging hypothesis into causes of cancer relapse which is in part related to chemotherapy response, and would likely apply to additional cancers other than leukemia.

“Chemotherapy has increased the number of years cancer patients survive, but if you look at the overall death rates for people with leukemia, they are relatively unchanged,” said Bhatia. “The problem is that the tumour comes back. It’s the relapse, then, that kills the patients. Our goal is to prevent the relapse altogether.”

The study was funded by the Canadian Cancer Society, the Canadian Institutes of Health Research, and the Ontario Institute for Cancer Research.