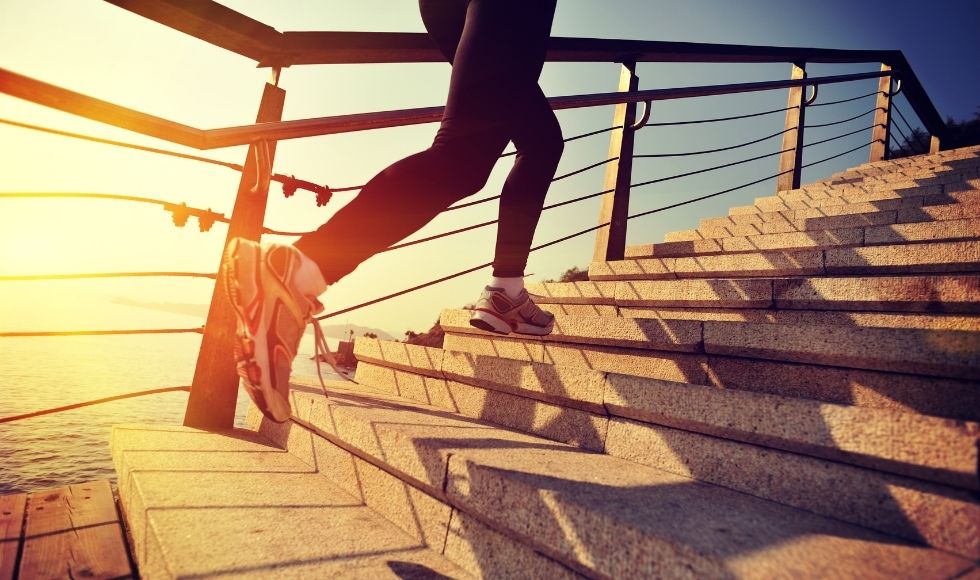 Researchers find stair-climbing is a safe, efficient and feasible option for cardiac rehabilitation, a particularly relevant finding during the pandemic, when many people can't exercise in a gym. (Shutterstock image)

A team of McMaster researchers who studied heart patients found that stair-climbing routines, whether vigorous or moderate, provide significant cardiovascular and muscular benefits.

The findings, published in closely related studies in the journals Medicine & Science in Sports & Exercise and Frontiers, address the most frequently cited barriers to exercise: time, equipment and access to gym facilities.

“Brief, vigorous stair-climbing and traditional moderate intensity exercise both changed fitness, which is a key predictor of mortality after a cardiac event,” says kinesiology professor Maureen MacDonald, one of the lead researchers on both studies.

“We’ve shown stair-climbing is a safe, efficient and feasible option for cardiac rehabilitation, which is particularly relevant during the pandemic when many people don’t have the option to exercise in a gym,” she says.

While it is widely known that exercise and lifestyle changes reduce the risk of secondary cardiovascular disease, statistics suggest less than a quarter of all cardiac patients adhere to fitness programs.

Researchers worked closely with the Cardiac Health and Rehabilitation Centre at the Hamilton General Hospital to develop an exercise protocol that did not require specialized equipment or monitoring and could be easily performed outside a laboratory.

Participants with coronary artery disease who had undergone a cardiac procedure were randomly assigned either to traditional moderate-intensity exercise or vigorous stair climbing: three rounds of six flights of 12 stairs, separated by recovery periods of walking, with participants selecting their own stepping pace.

“These patients who had undergone a coronary bypass or stent procedure had muscle that was compromised, compared to age-matched healthy controls,” explained kinesiology professor Stuart Phillips, a co-author of the studies who oversaw the analysis of muscle tissue taken during the study.

Previously, there had been very few studies of the impact of exercise on cardiac patients’ muscle specifically. This analysis shows heart patients can still repair and build lost muscle.

“Even in just a short period, whether it was moderate intensity, continuous training or high-intensity stair climbing, there were beneficial adaptations in muscles after a cardiac procedure,” Phillips says. “The improvements were clear.”