Understanding the science of immunology 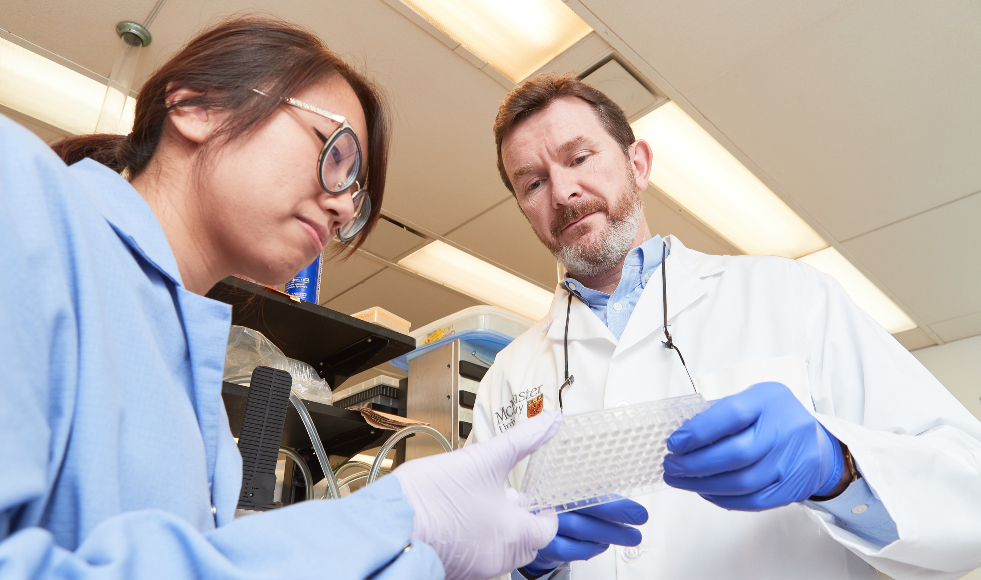 Mark Larché was reading the magazine New Scientist while on the subway in London when he came across an article that caught his attention.

He was 18, but had known since a young age that science was his calling. This particular piece on immunology research from Peter Doherty and Rolf Zinkernagel would change his life.

“The article was about how the immune system differentiates between self and non-self, which is basically why we don’t make an immune response against all the proteins in our own body, and yet our immune system is able to recognize almost everything else that comes into our body,” says Larché. “I had never really thought about this and was fascinated by it, and that’s what got me into immunology.”

Larché, raised in the Wimbledon area of London, completed an MSc and a PhD in immunology at the University of London. He spent three years at St. Jude Children’s Research Hospital in the United States working in the department of none other than Doherty who, with Zinkernagel, won a Nobel Prize in 1996 for their work in the field.

Larché returned to the United Kingdom, where he spent the early years of his career as a researcher at Imperial College in London.

A desire to advance his career and raise a family in a smaller city with wide open spaces resulted in him and his wife eyeing relocation to Canada or Switzerland.

As fate would have it, an offer arrived to serve as the Canada Research Chair in Allergy and Immune Tolerance, as well as a professor in the Department of Medicine at the university. He accepted and came to Canada in 2006.

Today, Larché continues to serve in those roles, and he also holds the McMaster University / GlaxoSmithKline Chair in Lung Immunology at St. Joseph’s Healthcare Hamilton.

Much of his research focuses on manipulating T cell responses using synthetic fragments, called peptides, of the proteins that cause the disease. The goal is to “switch on” and “switch off” immune responses. The resulting outcomes are used to develop new treatments for immunological diseases, including peptide vaccines.

“I’ve always been interested in chronic inflammatory diseases, so my interests are quite broadly spread among allergic disease, autoimmune disease and transplant-related disease,” he says. “Virtually everything I do is around trying to develop curative therapies by manipulating the immune system. We know it can be done.”

Larché has labs at McMaster, and in the Firestone Institute which is an initiative of McMaster and St. Joseph’s. Among his current projects are developing a vaccine to cure rheumatoid arthritis, as well curative vaccines for allergens like peanuts, dust mites, tree pollen, and those produced by cats.

“Dr. Larché is one of the world’s leading researchers focusing on understanding the immunological responses in the upper and lower airways after exposure to noxious stimuli, particularly environmental allergens,” says Paul O’Byrne, dean and vice-president of the Faculty of Health Sciences. “He is an outstanding scientist, whose research has been groundbreaking and has led to potential new treatments for allergic diseases.”

When it comes to career highlights, Larché points to a critical discovery he led 20 years ago at Imperial College. There, his team injected synthetic peptide fragments of known allergens into asthma patients.

“We basically demonstrated by doing that, you can directly activate T cells, thereby inducing an asthma exacerbation,” he says. “It turns out there’s a big T cell component to airway narrowing in asthma, which was quite a break from the traditional dogma. Up until that point, it was thought T cells were only very distantly involved. We showed that if you tickle those T cells, who can get very dramatic airway narrowing within a few hours.”

“In all the vaccine work we’ve done, I’m interested in understanding how it works and how we are manipulating the immune system. It is great if there is a clinical translation, but what I’m really curious is about how it works.”

Larché and his wife, Maggie, an associate professor in the Department of Medicine at McMaster and a rheumatologist at St. Joseph’s, have two sons, Tristan, 12 and Finlay, 10. The family frequently enjoys exploring the great outdoors in the Hamilton area and at their cottage in Algonquin Park.

This active lifestyle is visible in Larché’s office at McMaster, which features race medals and running shoes. A cross-country runner, he runs the 10 kilometres from his home on the escarpment just outside of Dundas to work as often as he can. He’s also a regular at Hamilton’s Around the Bay Road Race.

And, as in his personal life, Larché also has a professional finish line he’d like to cross.

“I hope within my lifetime, some of these therapies will make it into clinical practice,” he says. “We’re very close with the allergy vaccines, and we could be talking just a few years. If I can help lead science in the right direction when it comes to disease processes and how they work, I think it would be fairly transformative in that it would get a lot more people taking that approach more seriously, not just in allergic disease but in other disease areas.”